At Heritage Elementary, we believe that parents are the primary educators and are responsible for the moral and intellectual development of their children. We work in partnership with parents to help them fulfill those responsibilities. We encourage parents to participate in their student’s education and become involved in every aspect of this process.. 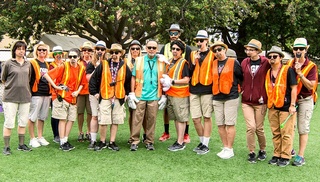 Many psychologists maintain that the greatest human need is the need to be needed. How satisfying would it be to have the appreciation, esteem, and even love of a large group of people whom one knows personally and whom one values as friends! One can witness just such a sincere outpouring of affection annually on ‘Pete’s Day’ at Heritage Elementary School.

‘Pete’s Day’ was the collective brainchild of teacher’s aides Monica Shore, Myra Weldon, and Amanda Sullivan. In 2014 these ladies came together and decided to honor their colleague and friend Pete Herrera of the American Heritage Charter Schools Maintenance Department. You see, every day Pete is out directing the busy student drop off traffic at Heritage Elementary. He and the teacher’s aides keep the students safe as parents drop off students in the mornings and pick them up in the afternoons. Pete wears an orange safety vest emblazoned with the words: “I YELL BECAUSE I CARE.” He wears oversized, white Mickey Mouse gloves that drivers can readily see and if needed, he is not shy about shouting “Get moving! Move your car!”

This year’s ‘Pete’s Day’ happened to fall upon Pete’s birthday, May 11, so the 600 children and staff took up positions surrounding a spot on the athletic field where Pete stood while those surrounding him sang him a happy birthday song that bounced off the building walls, drowned out the sound of traffic on Valley Parkway, and practically echoed for a block in all directions.

How did ‘Pete’s Day’ originate? Co-organizer Monica Shore relates that “We had ‘Twin/Triplet Day’ as a spirit day several years back.  Myra Weldon and Amanda Sullivan decided to be triplets with fellow Maintenance Department employee Tommy Lay (with whom they shared recess duty), and Pete complained that no one asked to be his twin. The three of us then decided we would all dress like Mr. Pete on his birthday.”

Shore continued “Over the next few years, more and more of us have dressed as Pete. I think this year was the best because the kids got a chance to dress up as Pete. He was very touched by the fact that all the kids came out of their classrooms and sang to him.”

Co-organizer Myra Weldon continued “Pete was overjoyed with this and so were all the parents and children as they came through to drop off their children. He was so funny and touched that he had pictures taken with his phone and then he asked me to show him how to text it to his wife.  He even has the picture on his refrigerator I believe.  We were also put on the website for Heritage K8.  And from there it has just kind of become a tradition for us ladies; however, other staff members are starting to join in. So we asked if ‘Mr. Pete Day’ could become a spirit day and it didn't really happen until this year when Monica (Shore) went back to (Principal) Veronica (Farran) and asked if the entire school could dress up for his birthday and she said yes.  So we sent out secret emails to our parents and students and told them about Pete's birthday and asked them to dress up like Pete and then we would all come out and sing him happy birthday at 7:45 am.  And of course Monica and I and a few others did our duty on car line as Mr. Pete.  Pete was touched to the point of tears and said he was glad he had sunglasses on!  Pete is just a wonderful man and has such a love of life for the kids and his co-workers.  He is a joy to work with and is truly dedicated to our school and students.  The kids love Mr. Pete and so do we.  It has been an honor to work with him and celebrate him each year.”

And how did all this hoopla make Pete feel?  “I was amazed! Having people appreciate you makes you feel great waking up in the morning and seeing everybody.”

Principal Veronica Farran summed it up: “Mr. Pete Day is the perfect tribute to a man who cares so genuinely for our students. He could not be more devoted to nor could he work any harder to ensure the safety and positive experience of each student at Heritage Elementary.”

At Heritage Elementary, we believe that parents are the primary educators and are responsible for the moral and intellectual development of their children. We work in partnership with parents to help them fulfill those responsibilities.

Our fundamental curriculum is designed to provide our students with a springboard to higher-level thought. The skills they learn are tools to be used as they progress in their education.

At Heritage Elementary, we believe deeply that a complete education of the whole child includes the development of character. We have identified several virtues that we feel are essential to a well-rounded person, and we focus on one of them each month.